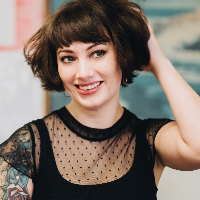 Stephanie Joline is an Indigenous writer, director, and producer based in Halifax, Nova Scotia. Her Indigenous roots come from her mother who is Inuit from Labrador; her father is French Acadian from the South shore of Nova Scotia. Equally adept at film and television, Stephanie’s stories provoke conversation, break boundaries, and are deeply rooted in inclusivity and feminism. Stephanie is part of a new cohort of filmmakers who are elevating Nova Scotia screen arts, executing big ideas on small budgets, to an international level.

Her feature films include Night Blooms (2021, starring Jessica Clement and Nick Stahl), a coming-of-age story set in the 1990s; Stream Me (2020), about an Indigenous teen who immerses herself in online gaming; and her debut Play Your Gender (2016), a documentary that pulls back the curtain on gender bias in the music industry, featuring interviews with Patty Schemel, Melissa Auf Der Maur, and Sara Quin. In 2020 she was awarded the Irving Avrich Award from TIFF recognizing rising Canadian talent.

Stephanie has also directed for television (Spirit Talker, 2019, APTN), made several short films, and created music videos for Beauts, Nathan Wiley, and The Superfantastics among others.

Link to Stephanie Joline on IMDB