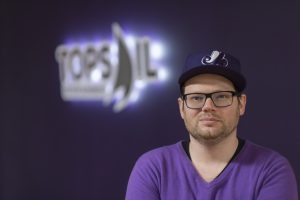 Graeme Hopkins has been part of the Topsail team since 2008 and currently serves as the company’s Development Manager, a role which involves a combination of working with writers and creators through all stages of the development of creative materials; editing, revising and polishing packages for distribution to potential partners and financiers; and of seeking new sources of financing and managing application packages to fund the early development of new projects.

He has a background rooted in logistics and operations, having previously worked in the production offices of numerous feature film and television projects, both with and prior to his tenure with Topsail; as well as a knowledge and understanding of script structure and formatting and scriptwriting software, having also served as the Script Coordinator for the first 5 seasons of Mr. D.

He’s particularly excited by Topsail’s current slate of projects in development, as a huge science fiction nerd and a fan of weird, awkward and irreverent comedy.

Graeme was a member of the Nova Scotia Community College’s first graduating class of the Screen Arts Program in 2001 and has been actively working in Nova Scotia’s film and television community ever since for the past 20 years.

Outside of work hours he’s a husband, dad to a three-year-old daughter and (arguably) a passable guitar player with the Halifax-based doom metal band Skullocybin.

Topsail Entertainment is a film and television production company based in Halifax, Nova Scotia.
For over 20 years Topsail has produced unique, critically acclaimed and award-winning content including Mr. D, Trailer Park Boys, and the Oscar-nominated The Lighthouse.

Link to Graeme Hopkins on IMDB