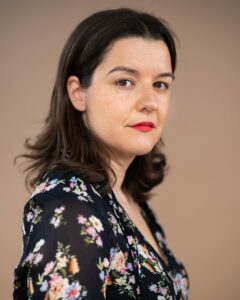 Originally from Bathurst (NB) on the traditional territory of the Mi’kmaq, Nancy Kenny (she/her) is a fluently bilingual actor, writer and producer who splits her time between Halifax/Kjipuktuk and Toronto/Tkaronto.

With an academic background in both theatre and political science, Nancy’s focus has always been on telling stories that investigate the role of women in society. As a recovering alcoholic, she is also driven to explore the effects of trauma and addiction through familial generations using a darkly comedic lens. As an Acadian who switches from French to English with ease, she loves to play with language duality and is currently interested in bilingual (or multilingual) productions.

Nancy is best known as the creator and solo performer of the award-winning and critically acclaimed, Roller Derby Saved My Soul (Canadian Comedy Award nominee – Best One Person Show), and Everybody Dies in December (Outstanding Individual Performance – London Fringe Festival; Best Drama – Halifax Fringe Festival). She is also the creator and executive producer of On the Fringe, a feature-length documentary about touring the Canadian Fringe Festival circuit. On the Fringe received its official theatrical premiere at NorthWest Fest in Edmonton in May 2022.

Past film and TV acting credits include principle roles in Sullivan’s Crossing (Crave TV/Bell Media), This Hour Has 22 Minutes (CBC), Zik (TFO), and No Good Deed (Lifetime). She also narrated and played the lead character on a new Heritage Minute on the Deportation of the Acadians.

Current projects include: I Don’t Feel Pretty / Chu pas assez cute, a bilingual absurdist dark comedy play with assistance from Pat the Dog Theatre Creators (Kitchener-Waterloo, ON) and Theatre Passe Muraille (Toronto, ON); and the development of Roller Derby Saved My Soul into a 13 episode series – pilot and pitch deck available.

Link to Nancy Kenny on IMDB