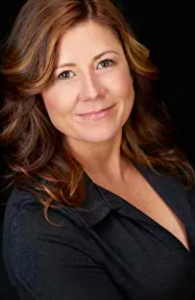 MJ is a stand up, comedy writer and actor who has worked in film, tv, radio and theatre.

Most recently, she has written for The Real Pigs of Norfolk County, the 25th season of This Hour Has 22 Minutes for DHX, and #RelationshipGoals for Hungry Eyes Entertainment. She has performed at the Halifax Comedy Fest, Yuk Yuks, Last Laugh Comedy Club, Casino Nova Scotia Natal Day celebration as well as at Open Mic Nights at the Comedy Nest in Montreal and Comedy Bar in Toronto.

Her plays for the theatre: Habit of Murder, Cradle and All and Joy to The World have been produced in venues across Canada. She has also performed on stage across Canada from the Stephenville Festival in Newfoundland and Labrador, to the Stratford Festival in Ontario, to the Banff Centre in Alberta.

MJ can be seen on MJ Comedy TV on Youtube and in her weekly comedy news show entitled 3 Dumb Things. As a comedic actor, her work has been recognized with nominations for two Merritt Awards and two ACTRA Awards. She played the lead on CBC’s series Backbencher, which took home a New York Festivals award and was also the lead in the Gemini award-winning series Olliver’s Adventures. Currently she plays recurring characters on the TV shows: Diggstown and PURE. Past recurring roles include characters in the comedies: Cavendish and TV with TV’s Jonathan Torrens. She has also appeared in Locke and Key, Captive, Trailer Park Boys, SEED, The Mist, Haven, Mr. D, Call me Fitz and in many Canadian films including You Ruined Our Life for which she was nominated for Best Actress.