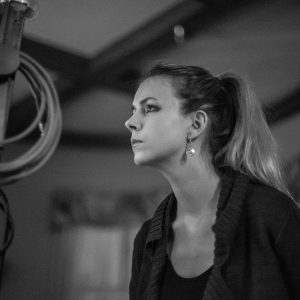 Leah is a filmmaker, photographer and actress hailing from Nova Scotia, Canada. She has written and directed four award-winning short films that have received broad screenings at festivals across North America.

Her 2015 short, MY YOUNGER OLDER SISTER (which she also stars in) received a nomination from ACTRA Maritimes (Canadian Acting Union) for Outstanding Performance by a Leading Actress and won a Platinum Remi award at Worldfest Houston. It was nominated for Best Canadian Short at the Silver Wave Film Festival. It will be broadcast as a part of CBC’s Reel Coast Showcase later this summer.

Her most recent film, INGRID & THE BLACK HOLE, won the first-ever 35k Women in Film and Television Bravofact pitch prize and was awarded Best Canadian Short at Edmonton International Film Festival. It was chosen to screen in Telefilm’s Not Short on Talent program at Cannes Film Festival, afterwards premiering at Fantasia Film Festival. It is now making it’s way across the international festival circuit, being in official selection at over ten festivals since it’s July 2016 premiere.

Leah holds a BFA in Drama from New York University. Her photographic works have been exhibited across the U.S. and featured in a variety of photography publications. More info at: leahjohnston.com

Link to Leah Johnston on IMDB