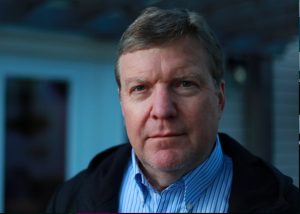 David MacLeod has worked in the film and television industry for over twenty-five years. He has been a production manager, producer, second unit director and executive producer. He began his production career with experience on projects as diverse as Haruki Kadokawa’s spectacular Samurai epic HEAVEN AND EARTH and Kurt Vonnegut’s offbeat MONKEY HOUSE for Showtime.

MacLeod production managed several early seasons of the Gemini award-winning Canadian series NORTH OF 60. He produced the Louisburg NS shot, Emmy nominated TV movie THE SONG SPINNER for Showtime, and co-produced CATCH A FALLING STAR for CBS with Alliance Atlantis and Citadel Entertainment. He joined NORTH OF 60 creators Wayne Grigsby and Barbara Samuels as a producer on the Nova Scotia set series BLACK HARBOUR for the CBC in 1996. BLACK HARBOUR was nominated for multiple Gemini Awards, including Best Dramatic Series.

Current productions include television series PURE for CBC, airing in early 2017 with Two East Productions. PURE is created and written by Michael Amo.

MacLeod is past chair and currently serves on the board of directors for the Canadian Media Producers Association. He is also a founder and current board member of Screen Nova Scotia.

Big Motion Pictures is one of Nova Scotia’s leading film and television production companies, focusing on scripted drama for distribution on all platforms.

Link to David Macleod on IMDB